It is curious how a little animal and in so short time could invade an island. The Fuerteventura squirrels, or the Moorish squirrel, arrived in the middle of the twenty century from Africa. It only took one pair of squirrels to be part of the species list of Fuerteventura in short time. Although we do not have to forget that it is an invasive species that cause that other endemic species are in danger.

But is better to tell their history. In the sixties an inhabitant of Fuerteventura that returned from Africa brought a pair of squirrel in his luggage. A male and female. He fed and took care of them in his house in Gran Tarajal. But one day, one of the scaped and he decided, unconsciously, to let the other one loose. In only three years, near to the house, this beauty pair of squirrels had already created a big colony. And what started as an entertainment for the neighbours because they fed and observed this new rodent, it has transformed in a big problem for the native fauna. Nowadays this invasive specie has extended around a great part of Fuerteventura. It is estimated that there are around one million of squirrels, bt it is difficult to know exactly because it is difficult to control this kind of species. The squirrels adapt easily to the environment and proliferate very quickly. It is an omnivorous specie that eat vegetables (lot of them from the crops), eat also eggs of endemic birds, insects and litter in general. 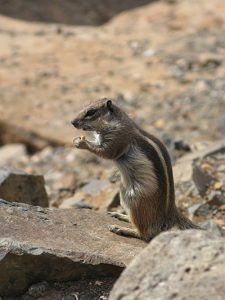 The Fuerteventura squirrel has become an authentic attraction for tourists, they feed the squirrels to take a photo with them. And this help to keep alive this specie that has caused and continue causing lot of problems in the ecosystem of the island. The squirrels do not have predators or competitors that threaten them so they have done whatever they want on the island. So squirrels has become a direct rival of lot of endemic and uniques species of Fuerteventura. And due to the squirrels some endemics species has decreased and do not let extend other species that do not have facilities to proliferate. And if we add that in some cases, squirrels eat the egg of endemic birds, the damage is worst.

For that reason, when you travel it is important to do not forget to leave everything in its place, pay attention to the informative boards, and never, never bring home a plant or an animal. As we have seen in the case of Fuerteventura squirrels, it does not matter how beautiful it could be, to our ecosystem could be terrible.

Preventive measure with the Fuerteventura squirrel: 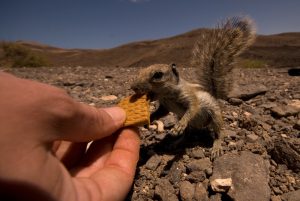