What to do in Arrecife if you visit Lanzarote 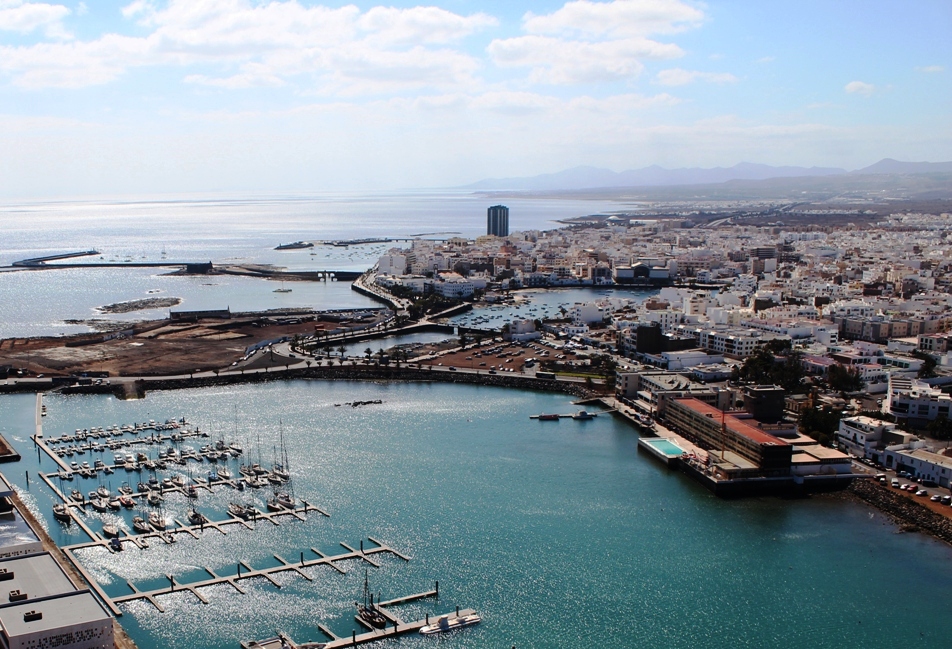 Are you on your holidays in Lanzarote and you want to know what to do in Arrecife? Keep reading and take note of the recommended places.

Arrecife is the capital of Lanzarote and its name comes from the meandering coast that is full of breakwaters, reefs and points which form a natural barrier that protect the city and the port. Arrecife is a small city that can be easily walked.

Its location, in the shelter of the ocean currents, lets the city grow to develope the main port of the island. So much so that traditionally Arrecife has been referred by the islander as “El Puerto” (The Port.)

The city economy has been based traditionally on fishing. Around this sector grew an important salting industry which was followed by the creation of the salinas that today it is preserved an area near the urban centre: near the San José Castle, but they are currently abandoned and unexploited

What to visit in Arrecife?

The main interesting places in the city are in the maritime front and  surround Charco de San Ginés. To understand the location of the city we can begin our route walking to Punta de la Lagarta, an spit of land extended further than San Gabriel Castle, and from where you can see and spectacular panoramic view. 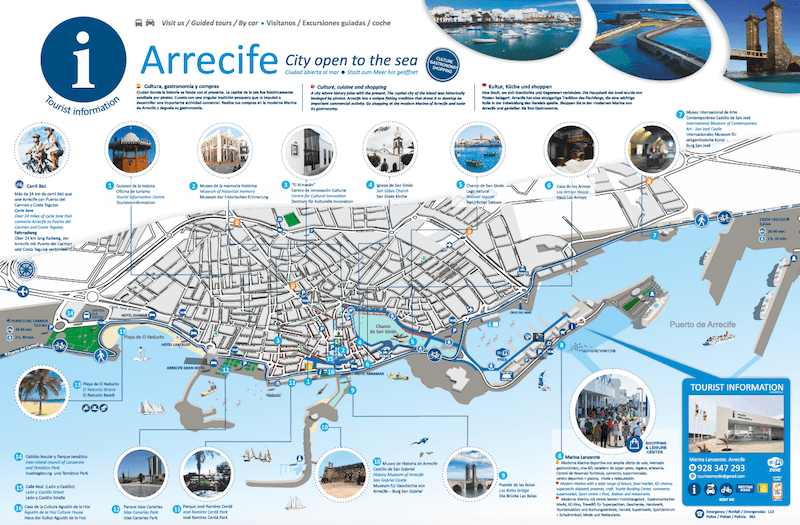 One of the most beautiful environments of Arrecife is the promenade and the little cobbled street towards from Las Bolas bridge to San Gabriel castle. This castle was built in 1572 to protect the port and the city of the sea attacks, although it was rebuilt after burn in the Moorish invasions.

Is an outstanding lookout point to see the city and all the coastal environment from a distance. Inside hosts the History Museum of Arrecife where you can take in the history of Lanzarote looking over the different thematic panels distributed in its different rooms: the biodiversity of the island, the cultivation of cochineal, its marine tradition, the fishing industrialization process (canneries and salt mines) etc… 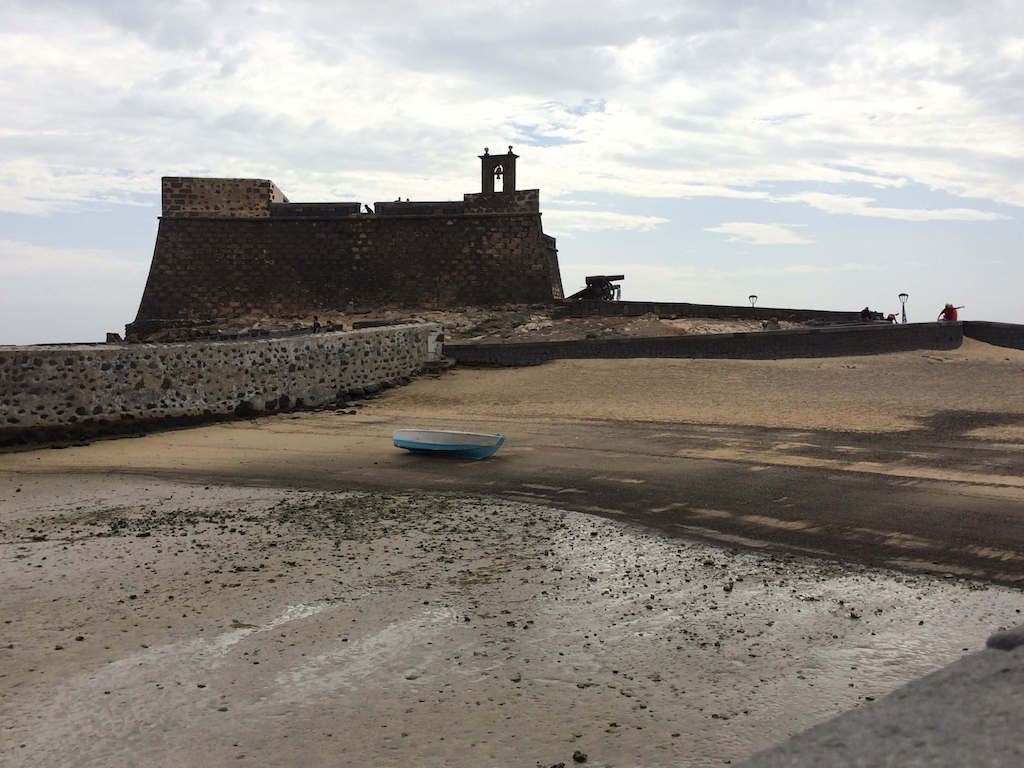 Just where the sea finds with the city we can find “Casa de los Arroyo”, one of the most representative examples of the typical canary architecture from the eighteenth century. This house served as customs office when Arrecife was not more than four houses around a port that acted as entry and exit of an Island that was governed from Teguise, the old capital of the island.

Its architecture is sober but elegant. You will impresses by the ground, the wooden balconies and stairs, and also the use of the Arabic tiles, that are underused in the houses of the island.

Currently is the headquarters of the cultural and science center of Blas Cabrera, in honor of the famous physical born in Arrecife.

“El Kiosko de la Música” is located in José Ramírez Cerdá Park just near “Casa de los Arroyo” and it is an exact reproduction of the old “Kiosko de la Música” from the 1950´s where the local people met and had pleasants moments with the municipal band that livened up dances and walks.

In the beautiful and picturesque “Plaza de Las Palmas” you can find San Ginés church, whose tower standing up the hamlet and serves as a references to know where you can explore to the heart of “La Puntilla”,  an old modest neighbourhood of fishers where you can breath culture, history and peaceful.

The church was built in 1574 as a little chapel, and then extended and rebuilt several times.

Our suggestion: Saturday mornings in “Plaza de las Palmas” and “La Recova” you can find a traditional market of local farmers where you can find a small selection of differents market stalls with ecological fruits and vegetables, artisan bread and pastries, jams, cheeses and wines from Lanzarote and other typical products.

It is a lagoon surrounded by white houses that is formed by the entry of seawater, where it uses like a rest place to small boats, all of these give a bucolic and seafaring atmosphere.

Around “El Charco” you can find some restaurants with fish and delicious local dishes, tapas and haute cuisine. Walk around this place is one of the most important things that you have to do if you visit Arrecife.

Any day of the week is a good moment to seat in one of the terrace and enjoy with the breathtaking beauty in this marine environment.

Our suggestion: The best moment to enjoy in “El Charco” is at sunset, when you can find friendly atmosphere with local  people.

Another point in the area with great interest is “El Almacén”, they offer frequently artistic events with creativity that huge increase in Lanzarote.

„La Casa Amarilla“ (The Yellow House) is an informative place of the Cabildo (inter-island council of Lanzarote). In this house takes places temporary exhibitions focuses on the knowledge and the memory on the Lanzarote’s ethnographic. It was declared as a listed building in 2002. Externally, the building comprises three facades lined with green and ochres glazed ceramic which origin the name of the house. 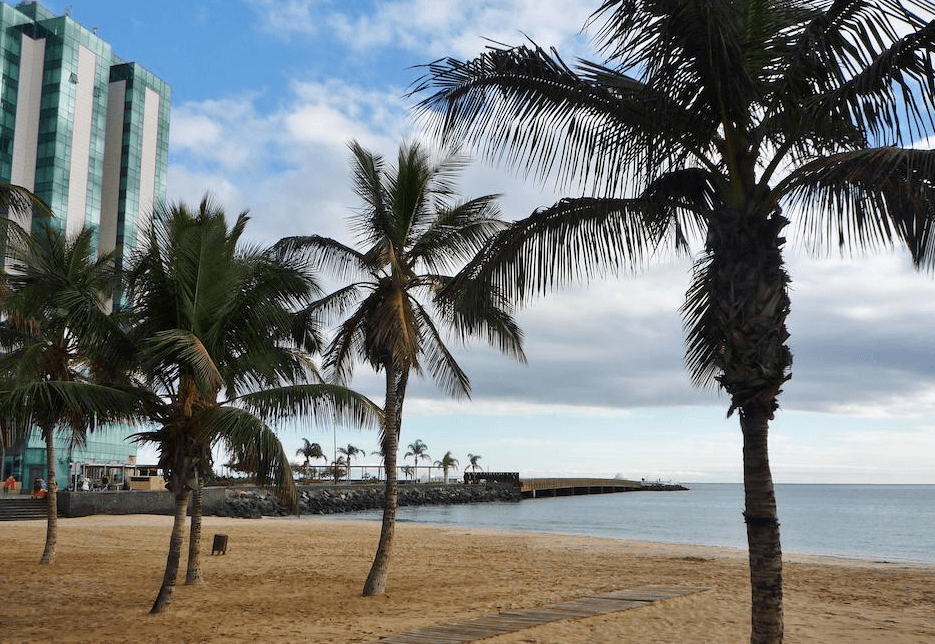 If you want to have a bath or enjoy a relax moment next to the sea we recommend visit the beach of “El Reducto”. A beach with white sand and peaceful waters, that it is protected by natural reefs surround the maritime front of the city.

It is the main bathing area of the city. A crowded beach with a mix of locals, tourist, athletes and walkers.

Our suggestion: Go to the top floor of Arrecife Gran Hotel and enjoy in its restaurant or piano bar of the breathtaking views of the city.

“La Marina” is a fantastic place to walk, to buy or to have a snack enjoying the sight of the jetties and the boats of the port in one of the numerous restaurants and bars with terrace that exists in this commercial area.

Our tourist information office is next to the cruises port and there you can find help and advice to organize your visit in Lanzarote, also you have gifts and details from César Manrique that you can take like a souvenir or for a present.

Our suggestion: Do not lost the local craft market that is realized in La Marina every Thursday morning. A place where you can find authentic jewels and unique pieces in leather, copper, metal, glass, wood and ceramic.

It is located on the outskirts of Arrecife, once we overtake the port area of Naos and Marina, about 2km from Charco de San Ginés. It was built at the end of the eighteenth century to protect the island against possible attacks by pirates. At the end of the 70’s, it was extended which featured the intervention of Cesar Manrique, who designed a modern restaurant in which the artist deployed all his creative potential.

Nowadays the castle houses the International Museum of Contemporary Art of the city which hosts the permanent collection “MIAC” dedicated to the artist Pancho Lasso (from Lanzarote) and other Canary artists. The temporary exhibitions room is located on the ground floor, next to the restaurant and in this rooms stages the exhibition program and the seasonal activities.