La Palma, also known as “La Isla Bonita” (“The Pretty Island”), is synonymous with spectacular landscapes, hiking routes and a cuisine that will not disappoint you. Every year more travellers choose this small island of the Canary Islands archipelago to enjoy their holidays. The month of May in particular is known as the trail running month, as the Transvulcania has won the recognition of everybody. Runners of every part of Spain, islander and foreigner runners come every year to repeat in some of the different categories of this spectacular race. Every runner who has participated, always returns. Its harshness and beauty will captivate you!! 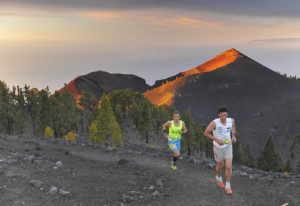 This year the races will take place from the 9th to the 12th of May, with activities for everyone. The most popular race is the Ultramarathlon, which starts in the Lighthouse of Fuencaliente and go across the path called “Gran Recorrido” GR 131 or “Ruta del Bastón” until Puerto de Tazacorte. From here, this way connects with the path Camino Real de la Costa up to the finish line, situated in the Plaza de España (Spain Square), in Los Llanos de Aridane.

It is amazing the view of the line of lights in the front part of the runners , just in the ascent leaving the Lighthouse of Fuencaliente. 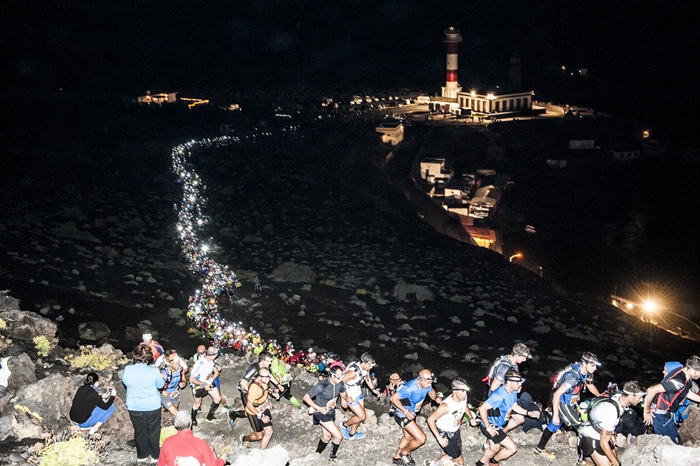 It is one of the hardest ultra rail races of the world, with a length of 74,33 kilometres and a positive incline of 4350 metres. It starts in a zero height and climbs to Roque de Los Muchachos, the highest point of the island, 2421 metres.

With a route of 45 kms, the Marathon is another of the most important event of this hard race which starts in the recreational area of the Refugio de El Pilar (El Paso) 1450 metres in height and runs through the all path Gran Recorrido GR 131- Bastón Route, until the port of Tazacorte.

This category has a accumulated positive incline of 1884 metres and requires a special physical condition, as the last stretch of the route goes down from the highest point of the island, the Roque de Los Muchachos, (2426 m) until the sea level (Puerto de Tazacorte Beach).

For all those who are introducing to the world of trail, the category of Half Marathon is the best option. This race covers  the first 24,28 km of the Ultramarathon. 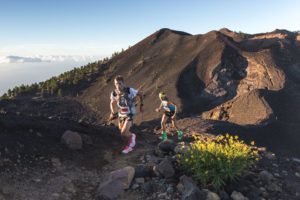 The start line takes place in the Fuencaliente Lighthouse and ends in the recreational area of Refugio de El Pilar. The race passes through the emblematic “Volcanoes Route”, but it goes in the opposite direction to the usual way, what makes hard due to a rising slope through the area of lava flows. Fortunately it crosses Las Deseadas, one of the ideal places for the running lovers, as it offers us wonderful views.

Another special event that weekend is the Vertical Kilometer, which starts its route in the beach of Puerto de Tazacorte (0 m.), passing on this first stretch by the famous “GR-131”, in the opposite direction to the race Ultra Trail. 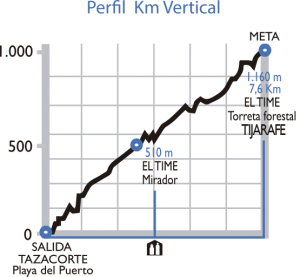 Without a doubt, La Palma celebrates in May the biggest party of the trail running and has become established year after year as the favourite race of important runners of the world. If you are on the island these days, come to see this event and encourage the participants. And if you are lucky enough to be runner…Just enjoy and live to the fullest the experience. It will be unforgettable!! 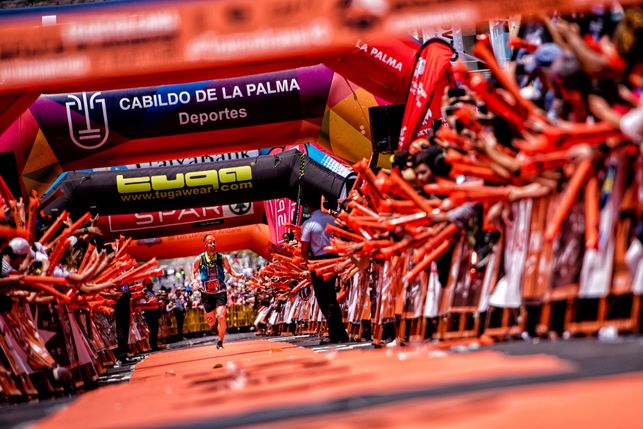